Orange County’s Hired Gun Trio has taken OC by storm and Voted Best New Band and Best Rock Band of the OC Weekly Best of 2019. With a unique style and sound all of their own, the Hired Gun Trio has played with Deadbolt, The Blasters, The Dickies, Bob “Derwood” Andrews from Generation X, Tom Dumont of No Doubt and many other notable Musicians.

HGT is continually adding new material to their sets with a set list that never gets stale and always unpredictable!  Come see us at our upcoming shows with many more shows to be announced soon. Lead Singer and Rhythm Guitar Player Scott Cahill has a vocal styling that is not your common “Star Search” or “American Idol” sound. His voice is definitely unique and sets him apart from the mass majority of singers. From Bob Dylan to Neil Young, and now our Scotty, goes against industry standards and our band is indicative of that…. 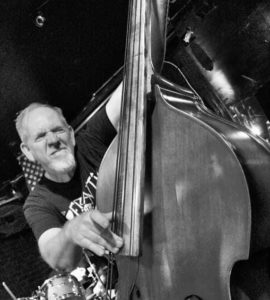 Dave Gettings, on his now infamous “dawg house stand up bass,” is an extremely talented musician from a long line of talented musicians and plays multiple instruments. Dave is our most experienced musician of the band and has been playing in bands for decades… He brings a wide variety of styles and his upright bass gives us that roadhouse vibe, you can directly hear how his influence and acoustic depth has expanded our sound. 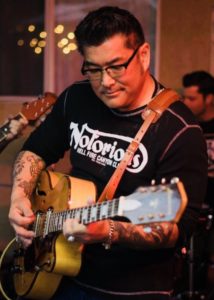 Lead Guitarist Todd Arita is an aficionado of all things from the 50’s and rockabilly/jump swing background clearly on display. Similar to the guitar sound that Billy Zoom brought to the band X, Todd’s melodic and inspired guitar solos and signature guitar sound rounds out and strikes a definitive aural uniqueness that sets the Hired Gun Trio no matter what genre they are playing. 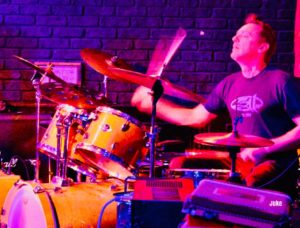 Our newest member hails from Chicago – Josh Glasser has a big musical background where he started playing drums in grade school all through middle school, high school and college as a marching band geek.  Aside from being a music producer and nightclub DJ, he played drums in the Indi Chicago Rock Scene and once was a Top 10 finalist for Blue Man Group.   Music influences from classic and progressive rock to ambient and eclectic, Josh delivers the beat and keeps the party moving and the people dancing!